SACRED TEMPLE OF THE BIG ISLAND

In the heart of Kailua-Kona by the pier, an ancient sacred site exists amid the busy visitor attractions of the seaside village.

Known for centuries as Kamakahonu, the royal compound fronting Courtyard King Kamehameha's Kona Beach Hotel in Historic Kailua Village was a spiritual center dating back to the 1400s. It was here that Kamehameha I established the unified kingdom's first capital during the final years of his life in Kailua-Kona. In 1813, Kamehameha I rebuilt the compound's former sacrificial temple, known as Ahu'ena Heiau, and dedicated it to a more gentle god, Lono.

During Kamehameha's reign, Kamakahonu, which means "Eye of the Turtle," included a royal residence, fishponds, gardens and other important sites that are now concealed by the hotel grounds and Kailua Pier. The temple itself, however, endures, thanks to the work of the late David Kahelemauna Roy, who led the effort to restore the heiau in 1975 in conjunction with Bishop Museum. Stones used to restore the temple were retrieved from beneath the ocean where they laid as a pile of rubble for more than a hundred years after the overthrow of the old religion in 1819. 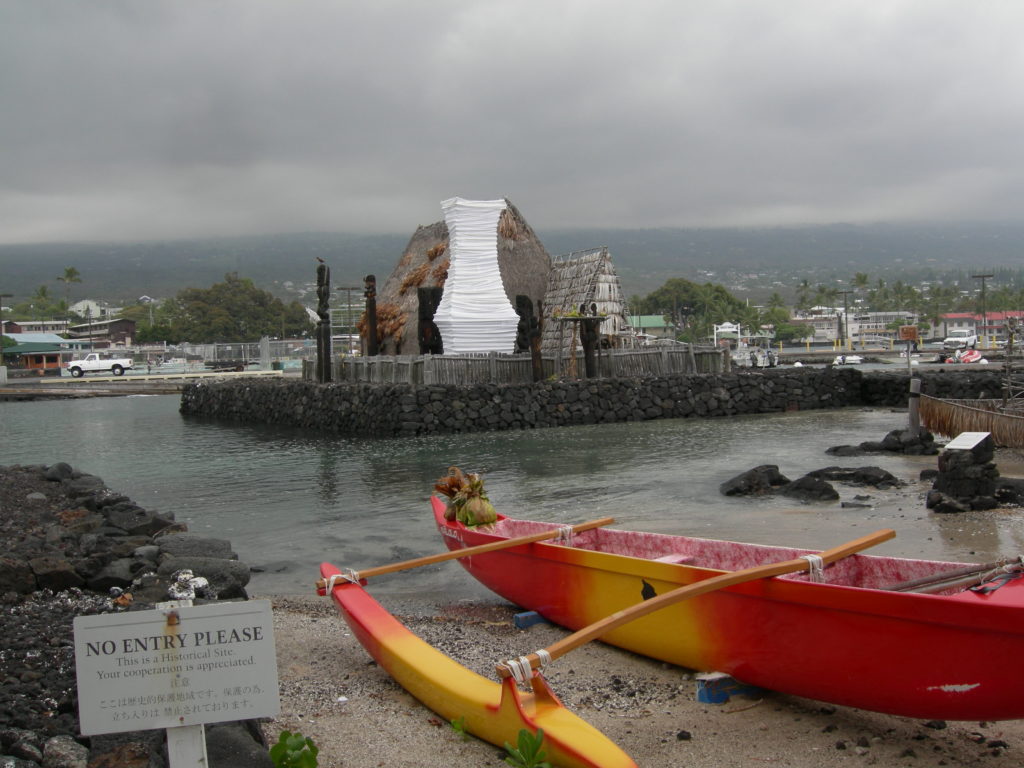 The restored Ahu‘ena Heiau features the traditional and sacred attributes of a Hawaiian temple of its stature. Known as “Lananau‘umamao,” the three-tiered oracle tower resembles a smoke stack and represents the high mountain of Mauna Kea. It is made of ‘ohia wood and covered with white tapa cloth known as “‘oloa.” The primary structure, Hale Mana, comprises the most sacred house on the platform. Thatched with tens of thousands of ti leaves, the hale is where the king would have held council with his chiefs and advisors. The dark border of amauu fern identifies it as a chiefly house.

Carved images (ki‘i) represent ancestral gods such as Kalaemoku, a healer of diseases. The other guardians “tikis” represent lineage, prosperity and protection. Additionally, Ahu‘ena Heiau features a thatched drum hale, as well as three offering platforms (lele). Next to the temple is a stone platform where King Kamehameha’s body laid in state after his death in 1819. The burial location of his bones and body has yet to be found.

Another major event in Hawaiian history took place at Kamakahonu that changed the course of Island culture forever. Following Kamehameha I’s death, his wife, Queen Kaahumanu, and son, Liholio, defied the longstanding kapu against women and men being allowed to eat together. When they shared food in public, the act of rebellion broke the kapu, which led to the destruction of idols and temples across the Islands.

Named a National Historic Site in 1964, Ahu‘ena Heiau is maintained and protected by non-profit Hawaiian cultural organizations. Despite its importance to Hawaiian history and its status as a sacred site, Ahu‘ena Heiau and the surrounding Kamakahonu compound are today surrounded by hotel grounds, vendors, commercial activities, visitor attractions, a nightly luau and the hustle and bustle of the busy tourist center of the village. When the hotel was built in the 1950s, there were no restrictions in place for building on a sacred site such as would be in place today. Regardless, traditional practitioners still worship and make offerings at the heiau, and the entire area still resonates a special aura steeped in the ancient mysteries of Hawaiian royalty.